Things have been hectic lately so much so I am going to take a week off. I have finally got all the equipment needed. - Ready for a 4 to 5 day excursion to Fens. I will write a brief and post it here when I get back.

Email ThisBlogThis!Share to TwitterShare to FacebookShare to Pinterest
Labels: Fens

I have finally got a good excuse to take a break. - A rest from researching the Bahro. Don’t ask it’s complicated to say the least. There are so many holes in the information.
Anyway I went by the GoMa offices the other day. They had a new linking book in. It had just been verified as safe by the maintainers. Nice bunch of folks over there at the GoMa. Why I never became a maintainer I don’t know. Oh yeah I remember why, because that suit is too hot and stuffy.
This latest non-D’ni book is the second of Whilyam’s ages I have visited. The first was Maw, a devilish age indeed. That reminds me I need to go back there with some climbing tackle. - Got to find me a why out!
Any way back when public instancing was working in the cavern I happened to meet fellow explorers, Whilyam, Janaba, Hitana and Erik. .
They helped me out with taking some photos for the Archiver. That day provided some fond memories. Ever since then I have followed their journeys as much as I can.

I rushed off to get myself ready and after a few hours I placed my hand on the linking panel...

I am pretty used to linking by know but this one took my breath away. It wasn’t the linking but the thick humid air of Fens. It felt like linking in to a brick wall. So much so I had to sit on some crates that were conveniently stacked near the link-in point.
Unfamiliar sounds, high above, penetrated the thick mist but from where I was I couldn’t see who or what was making them. Finally I became accustomed to this strange thick atmosphere and removed my jacket and started to have a look around. I noticed I was surrounded by some sort of pea green marsh. Not knowing how deep it was I started to search for a stick.

What the! I nearly wet my pants. Before I had time to find a stick, a thundering sound filled the air which made the hairs on the back of my neck stand up. It unnerved so much I immediately linked out. Back home I formulated a plan; this could be a dangerous age. Besides before I linked out I spied a building with a ladder close to the link-in point. I will have to investigate that but I must be properly prepared. I think I should ask Whilyam about that sound. I don’t know what the creature was that made that sound but one thing’s for sure it is darn big. It sure has got my interest perked though. I will go back, but armed I don’t know. - After all the Maintainers did say it was safe. Plus I’d rather shoot things with a camera. Mind you if some big angry beast is chasing I could always throw the camera at it...
Posted by Szark at 11:31 PM No comments:

Email ThisBlogThis!Share to TwitterShare to FacebookShare to Pinterest
Labels: Fens 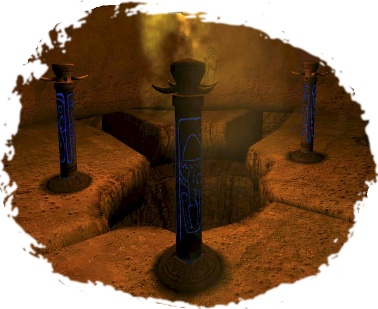 The more I think about the Bahro the more drawn in I get; they are an enigma that’s for sure. It struck me the other day, whilst kneading the bread dough, why. Why have them as slaves, some of the D’ni went to great lengths to control these winged Bahro. You must admit, a being that can link at will is not an easy thing to control. Let’s look at that control for a moment; every government has some sort of control over its citizens, whether its laws, with varied levels of enforcement, doctrine or liberal guidance, either way control is necessary at some level. Unfortunately the Bahro were not citizens but slaves and in order to be useful, controlled they would have to be. But four totem poles and a tablet, how mystic! And what about that radiating spiral symbol on the back of the Bahros’ heads; looks D’ni to me but I am not too sure. I think this spiral is similar to the one under the tree in the cleft.

Which begs the question of why four poles and a tablet? Yep I have a theory. What if the Bahro (totem) poles were one level of control, maybe a physical control of some kind? And maybe that branded radiating spiral symbol on the back of their heads is part of the Gahrohevtee (Great Words). Gahrohevtee is the collection of symbols (concept, ideas etc) that the D’ni used to write linking books. These special symbols are different to the ones the D’ni used for their written language. This branding could be a restricting concept of some kind, to stop them from linking at will. Or maybe it was used to bind the Bahro to the Tablet. And the Tablet itself was the actual control mechanism. This would make more sense as Dr Watson smashed the tablet which gave back the Bahros’ free will. This still doesn’t answer the question of why, why go to all that trouble. Ok there are a ton of questions but this is like peeling an onion, one layer at a time......
Posted by Szark at 6:30 PM No comments:

Other Blogs of interest.